Teen Who Was Pushed To Have An Abortion Pushed Back 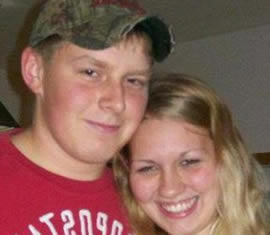 When Texas teenager, Reagan Koen, told her parents she was pregnant by her then boyfriend, Evan Madison, her parents were very upset with her, and her father was extremely angry, insisting immediately that she have an abortion and he would see to it. Reagan’s mother said she gave her daughter three options, only one of which was abortion. According to Reagan, her mother, herself had had four abortions previously.

Although her parents never physically threatened Reagan to have the abortion, they did exert considerable pressure on the teen. Her parents took away her car and cell phone, pulled her out of school, and forced her to take two jobs, thus isolating their pregnant daughter. Her father also said he was going to cancel her health insurance if she didn’t have the abortion. Although Reagan’s mother insisted that she gave her daughter three options, only one of which was to have an abortion, it was abortion that was clearly being pushed on Reagan. At one point Reagan said her mother met with her paternal grandparents to discuss the situation. It was then that she said she might slip Reagan an abortion pill through deception.

Frightened for her baby and herself, Reagan sought help from her boyfriend and his mother, Jaime Burnside. It was at this point that Burnside contacted the Texas Center for the Defense of Life seeking advice. They promptly filed a restraining order against the parents. Although Reagan’s parents denied many of the allegations, in February Reagan won her emancipation from her parents and the protection she needed.

Once free from the abortion threats, Reagan and Evan were married in a small ceremony. Evan wanted to assure Reagan that he would always be there as a dad. Evan and Reagan moved in with his parents after the wedding.

By mid-June Reagan’s parents had accepted the fact that Reagan and Evan were now married and going to be parents. After all the trauma, fences were mended. This is not at all unusual. Nine times out of ten parents who fiercely object to a daughter’s pregnancy and push for abortion do a 180 degree turnaround once they realize that the pregnancy is going to continue and they are, in fact, going to have a grandchild.

Reagan and Evan moved in with Reagan’s parents for the remainder of the pregnancy, and Reagan’s baby boy was born in September. Reagan’s mother said she was greatly relieved and it was a blessing to have her back. Hopefully this family can now put the past behind them and focus on the baby, not the abortion.