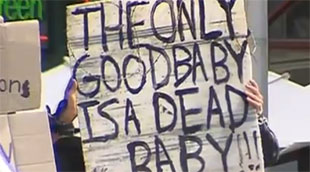 Everyone has a right to his or her own opinion. At least that’s how it’s supposed to be. There are very strong feelings on both the pro-choice and the pro-life side of the abortion debate, but each side has a right to express their opinions without being physically attacked or having their property destroyed. Unfortunately, more and more often that is no longer the case.

One of the worst examples of this just happened on October 12 in Victoria, Australia, at the 6th annual March for the Babies. This event has always been a peaceful march, but this year there was a pre-planned and well-coordinated attack on the pro-life participants with multiple injuries. Pro-life marchers were actually knocked to the ground and kicked by the pro-choice protesters because they disagreed with their pro-life views. 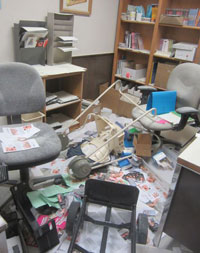 When the attack was over their hatred was still obvious from the damage to the stage where pro-life speakers were scheduled to talk and the destruction and defacing of signs and banners with their hateful messages like THE ONLY GOOD BABY IS A DEAD BABY.

Right here at home in the USA there are multiple examples of similar attacks, perhaps not as violent but equally hateful. For example, the Kansans for Life state office was vandalized and ransacked in September. The entire office was trashed and destroyed, items were stolen, and fire extinguisher chemicals were sprayed all over two of the rooms. 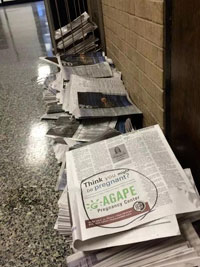 Also in September at Drake University in Des Moines, Iowa, 400 copies of the University newspaper were destroyed and left at the door of the newspaper office because the paper had printed a paid advertisement by the local AGAPE Pregnancy Center offering free pregnancy tests and ultrasounds. The school paper had run ads by Planned Parenthood in the past, so both sides of the abortion issues had been allowed to advertise.

This prompted an immediate response by the University President, David Maxwell, in a campus-wide e-mail. President Maxwell expressed outrage over the destruction of property. He commented that this goes beyond vandalism and is an attempt to curtail First Amendment rights regarding free speech, which is against the core values of the University. In this instance the rights of the pro-life students were protected. 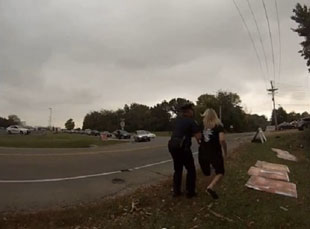 A similar event took place outside the Pickerington Central High School in Ohio when a pro-choice woman was so irritated with the signs that she started screaming obscenities at the students, saying You don’t share my views, and pushed over all their signs. When police arrived and saw what she was doing, the officer explained to the woman that the students had every right to do what they were doing and threatened her with arrest. After calming the woman down, the officer suggested that she apologize to the group so she wouldn’t be arrested. After a smirking I’m so sorry, the students said they wouldn’t press charges and she was free to go. The young students were being far more reasonable and mature than the adult woman, in spite of the damage she caused.

Since schools have started up this fall, Students for Life have had multiple examples of abuse and hatred thrown their way. From flyers being torn down in Indiana, to crosses being stepped on in Ohio, to curses and insults being hurled at students in Michigan, it goes on and on.

Meanwhile, there appear to be no examples of similar abuse, attacks, and destruction on the part of pro-life people toward their pro-choice opponents. Why can’t the pro-choice side be tolerant of a difference of opinion?