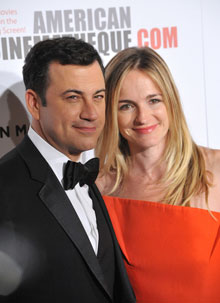 In a unique way to reveal his wife’s pregnancy, after revealing that he will host the 89th Academy Awards in February, Jimmy Kimmel announced during his show, My wife is hosting a baby inside her body. So that’s exciting.

Kimmel was certainly not politically correct when he went on and on about the ultrasound they watched, saying that the baby doesn’t know, but they are already spying on him/her, using the baby term over and over.

The terms for describing a baby according to the pro-choice groups is to say fetus, embryo, piece of tissue, blob of protoplasm, etc., but there was none of that rhetoric in Kimmel’s announcement.

Could it be that Hollywood celebrities are beginning to drop the pro-choice rhetoric and recognize that a baby is a baby after all? Or is it only a baby when it is planned and welcomed, and otherwise would only be a piece of tissue to abort?

Could it be that the pro-choice rhetoric is only used to placate those who support abortion while actually having difficulty with their own positions? Interestingly, when celebrities like Jimmy Kimmel embellish their excitement over having a baby (their second child), it has the effect of diminishing the case that a baby is not a human.