Florida Man Given Prison Term for Causing His Girlfriend’s Abortion 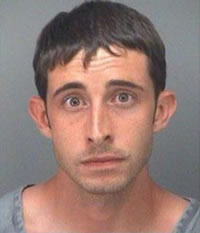 The son of a prominent Florida fertility doctor has been sentenced to almost 14 years in prison for causing his ex-girlfriend’s abortion by tricking her into taking an abortion pill.

It seems 28-year-old John Walden had two girlfriends, and when Remee Jo Lee became pregnant he panicked because he didn’t want the other girlfriend to find out.  His solution was to trick Lee into having an abortion because she planned to have the baby.  Since he worked at his father’s fertility clinic, he was able to forge his father’s signature on a prescription for an abortion-causing drug.

His elaborate plan included having Lee go for a prenatal exam at his father’s clinic and then calling her the next day to say she had a bacterial infection and needed to take amoxicillin and prenatal vitamins.  He then switched the label on the abortion drug and gave them to Lee.

Unsuspecting Remee Lee took what she thought to be an antibiotic to protect her baby but instead was taking a drug to cause her to abort her baby.  After experiencing excruciating pain she was rushed to the hospital where she was told that she lost the baby.  It was at the hospital that the doctor saw the pills she took and explained what they really were.

Lee was devastated on every level.  She caused the death of the baby she so wanted by taking the pills and at the same time realized what her boyfriend had done to her.  Later she would find that he had lied to her repeatedly during their relationship.  At Walden’s trial she stated that she only wanted the court to show him the same amount of mercy he showed her.

Walden was originally charged with the murder of an unborn child and faced a possible life sentence if convicted.  Because of this he chose to accept a plea bargain for lesser charges, for which the judge gave him the maximum sentence for such a cowardly crime.  Walden has begun serving his sentence, and Lee is still trying to recover from the loss of her child.