In the murder trial of abortionist Dr. Kermit Gosnell, Kareema Cross, his medical assistant, testified that she had seen one baby who survived the abortion “swimming” in the toilet and “trying to get out.” Cross went on to tell about the horrors at the Women’s Medical Society abortion clinic during her four plus years employed there.

Prosecutor Joanne Pescatore asked Cross if she ever saw those babies move, and Cross told the story of the baby in the toilet swimming to get out.

Cross testified that patient Shayquana Abrams had come to the clinic seeking an abortion “and she was big.” “That was the largest baby I ever saw,” Cross stated. When the baby was aborted alive, “The baby was still breathing… The doctor cut the back of the baby’s neck but didn’t do suction to suck the brains out… I called people over to see it and we took pictures,” Cross testified.

Another employee at the abortion clinic, Tina Baldwin, told the grand jury that Gosnell “once joked about a baby that was writhing as he cut its neck: ‘That’s what you call a chicken with its head cut of,'” he said. 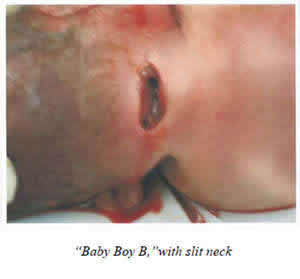 “It was supposed to go upstairs in the freezer, but it was still there the next day because the janitor complained,” Cross added. She went on to say that she saw Steven Massof, another clinic employee, snip babies’ necks 25 to 30 times and that she saw babies breathing after abortions at least 10 times.

Abrams came to the Women’s Medical Society for an abortion when she was a teenager and testified that she was 29 weeks pregnant and that she was in the hospital for two weeks with complications after the abortion, which included a blood clot in her heart.

Cross went on to testify about another baby moving its arm back and forth after it was aborted. Cross said the baby was breathing for 10 or 20 minutes before its neck was snipped with scissors. On a different occasion Cross testified that she had heard a “soft whine” coming from one of the aborted babies.