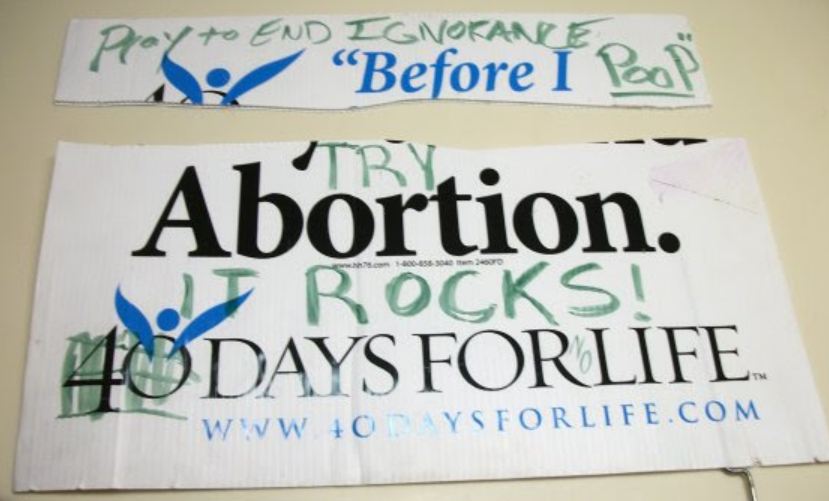 Regardless of your views on abortion – whether pro-life or pro-choice – most people do believe in our individual freedom of speech.  Unfortunately, this doesn’t seem to apply in the minds of some when the speech is of a pro-life nature.

On April 8 pro-lifers participating in their annual 40 Days for Life in Lansing, Michigan experienced the wrath of someone who had an opinion different from their’s.  The man grabbed one of their signs, cut it in half, and changed the message to one of his own so it read “Try Abortion – It Rocks.”

Unfortunately, this type of behavior is going on frequently, especially on college campuses, as in last month’s attack on a young student at the University of California Santa Barbara who was physically attacked by a professor, no less.

Fortunately pro-life students on college campuses are now getting some help from a group called Foundation for Individual Rights in Education (FIRE), a nonprofit organization that supports academic freedom, freedom of expression, and rights of conscience at campuses across the country.

One of the cases defended by FIRE occurred at Dartmouth University when senior Robert Smith set up a display of American flags representing the number of lives lost through abortion.  Although his group had permission for the display from the university, another student felt he had the right to destroy it by driving his car through the display destroying much of it.  The irony of this was the bumper sticker on the car stating “Coexist.”  Apparently coexisting only applied to people of his own personal mindset.

Many similar incidents have occurred on college campuses across the country.  At Missouri State a student group had set up a memorial display of 4,000 crosses, only to have it vandalized by a student with opposing views.

According to FIRE’s President, Gred Lukianoff, an incident at Northern Kentucky University was the most perverted inversion of the concept of free speech he had seen.  After a pro-life display was erected by an NKU student group with permission of university officials, NKU professor Sally Jacobsen invited the students in one of her classes to express their freedom of speech rights to destroy the pro-life display if they wished to.  Lukianoff was aghast that the professor would constitute the destruction of another person’s property as an expression of free speech.

Of all places, one would think that expressing differences of opinion at colleges and universities would be the most respected right of all.