Opposition to Abortion Grows In the Millennial Population 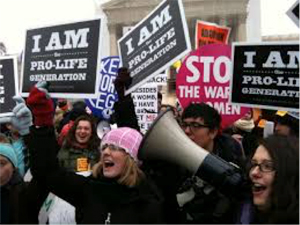 Recent polling commissioned by Students for Life of America and released in June is showing continued increases in millennials who oppose abortion. The study found that 53 percent of millennials surveyed believe abortion should be illegal in all or most circumstances. This figure represents an increase of 9 percentage points over the previous 2012 survey.

Although millennials hold liberal positions on the social issues of gay marriage and legalization of marijuana, their positions are clearly conservative on abortion.

Interestingly, however, their opposition to abortion does not translate to labeling themselves as pro-life. In fact, they often refer to themselves as pro-choice. Is this pro-choice labeling a reference to their wanting choice in all issues… choice of where to go to college, choice of when to become sexually active, choice of friends, choice of sexual orientation, and choice of their position on abortion? Or has the pro-life label in their minds carried a negative image of people who want to force their views on others? Perhaps a survey on labels would provide the answers.

Regardless of the labeling, however, recognizing the need for protection of unborn children by millennials is an important position for the future of society.